What did Stephen Hawking Really Say about Black Holes? 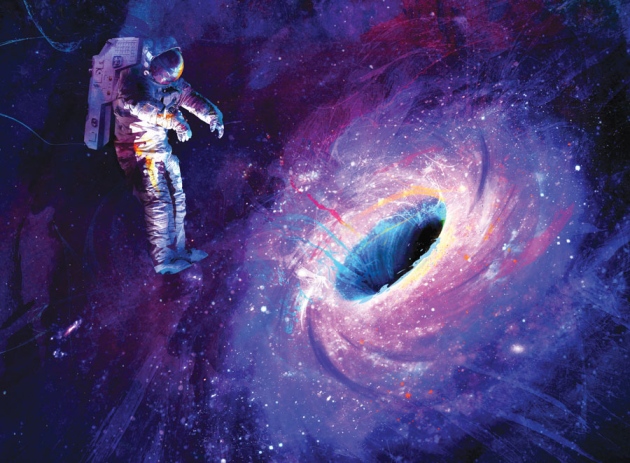 Many of us have recently seen in the media the shocking news that Stephen Hawking has claimed that “there are no black holes”. But did Hawking really propose that black holes do not exist? Stephen Hawking did recently post a very short paper, based on a talk that he gave at the Kavli Institute for Theoretical Physics in Santa Barbara in 2013, where he does make some radical claims about black holes. To make the long story short, Hawking does not say that black holes do not exist and so the black hole aficionados should not be too worried. Hawking proposes instead that black holes behave in a way different than we are used to. This is certainly not the first time in history that we change our mental picture of black holes.

These monsters first emerged as a consequence of General Relativity in calculations done during the ‘30s. The black hole was a classical object, in the sense that it obeyed General Relativity, which is a classical theory, as opposed to quantum mechanics. Black holes were then studied on a purely theoretical basis until the early ’70s when the first candidate black hole was discovered in the X-ray binary Cygnus X-1.

In the mid-’70s, Jacob Bekenstein and Stephen Hawking changed the way in which scientists thought about black holes. They discovered that black holes have entropy, which means they have a temperature. Entropy can be seen as the amount of information that is hidden and stored in the microscopic world and that cannot be accessed, in practice, from our macroscopic world. In short, entropy tells you how messy a system is. They also discovered that this entropy is proportional to the area of the black hole and not its volume, which is a very strange property as if there is nothing inside a black hole.

These objects are therefore not really black but they emit what is now called Hawking radiation. This radiation field is created just outside the black hole event horizon (i.e., the point of non-return) by quantum energy fluctuations. The black hole itself does not create such fluctuations, but it acts as a “catalyzer”  that amplifies and stabilizes such fluctuations. Hawking radiation is therefore a mixture of quantum effects (vacuum fluctuations) and classical physics (general relativity). An astonishing prediction of Hawking radiation is that black holes will lose energy in this process and thus decrease their mass (evaporate) and finally disappear. Our view of a black hole shifted therefore from an eternal cold object from which nothing can escape to a new beast that swallows everything it encounters but that can somehow lose weight (thanks to quantum effects) over time. Don’t feed the beast and at some point, it will die of starvation.

We know that an observer falling through the black hole should feel nothing special when crossing the event horizon. And we know this because general relativity (or better the equivalence principle) says so. But if there’s Hawking radiation then an external observer can measure the black hole temperature with a thermometer, pushing it closer and closer to the black hole, and see a growing temperature as the thermometer approaches the event horizon. So is the event horizon a special place or not? If an observer falling into the black hole does not notice anything special, whereas an external observer with a thermometer sees a very specific property at the same location, then there’s a conflicting description of reality. This is a very fundamental question because there are two principles in conflict here, which represent the pillars of modern physics. The first is the equivalence principle, which is the base of the theory of general relativity. The second is the conservation of quantum information, which states that you cannot destroy the information carried by a physical system in any way.

This immense problem has no obvious resolution as of today. The problem is now known as the black hole information paradox. The black hole swallows material with certain physical information associated with it but re-emits radiation (Hawking radiation) that carries no information about the physical system itself. Indeed the information paradox emerges because we do not have yet a unified theory that describes both quantum physics and gravity (the so-called quantum gravity theory), and black holes need to be described by both gravity (e.g., their gravitational field) and quantum mechanics (e.g., Hawking radiation).

In the ’90s, a possible solution to this paradox, named black hole complementarity was proposed by L. Susskind and G. ‘t Hooft.  In short, the black hole complementarity states that the event horizon is not a special place and it is a special place at the same time depending on who describes it. If this sounds non-sense then we should remember that modern physics is full of situations like this: light is a wave but it is also a particle, a particle has a well-defined position, or a well-defined velocity (Heisenberg principle), and so on.

But not everyone was convinced by this string theory argument and in 2012 it was argued that a freely falling observer would see a black hole firewall instead of the standard quiet event horizon. The weak point of the black hole complementarity argument is that if one looks carefully at the properties that Hawking radiation should have, then it is found that the radiation should be in a state that is forbidden by quantum mechanics. Therefore it is not possible to preserve information and at the same time save both the equivalence principle and the quantum theory. So here we go again, there’s a conflict between general relativity and quantum mechanics!

It is only at this point that Hawking’s paper enters the story. Indeed Hawking proposes that black holes do not have firewalls but to do so one needs to give up the idea of event horizons. The reason why firewalls are so disturbing is that they violate the equivalence principle. Hawking, therefore, proposes the existence of apparent horizons, which fluctuate in time. This does not mean that black holes do not exist. Neither does it mean that black holes do not swallow matter. This represents a new shift in the way we see black holes similar to what happened in the mid-’70s with the Hawking radiation.  The term apparent horizons mean that if we want to save quantum mechanics and general relativity at the same time, then black holes cannot be stable objects as we have imagined them until now. The material and the information that enters into them will not be destroyed but only heavily mixed and spitted out in a very chaotic form. The details of how this happens are unknown and we should first find a quantum gravity theory to reveal all the necessary details. This, however, implies very little or no difference from an observational (astrophysical) point of view. In short, black holes are still out there in the Universe, although the holes might be a bit different than we thought.