What Are Neutron Stars Made Of? 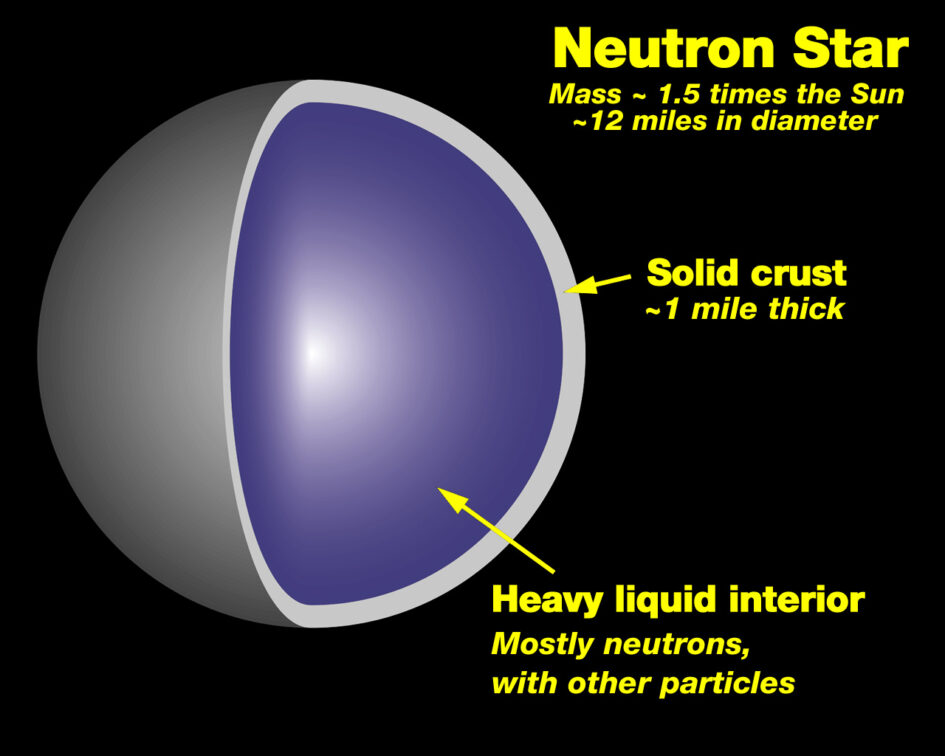 The wonderful discovery of the Higgs boson announced at CERN in July 2012, has represented another big leap forward for the Standard Model of particle physics that explains how elementary particles behave in the microscopic world. The Large Hadron Collider, the largest and most powerful experiment ever made (but only the 6th in terms of costs, see list below٭), has improved our understanding of the fundamental forces of Nature, in particular the strong force, which rules the interaction between quarks and determines the properties of atomic nuclei.

Besides gravity, the strong force is the fundamental player that sets the physical properties of neutron stars. Indeed inside these objects, the density of matter grows so high that particles touch each other and the strong force becomes the dominant interaction. The matter found in the neutron star’s very center (called inner core) is known as cold ultra-dense matter and its composition is currently unknown. Poorly understood properties of the strong force do indeed affect our understanding of matter at those extraordinary densities (see e.g., “Rethinking Neutron Stars“). Making theoretical predictions about the ultra-dense matter in neutron stars is extremely difficult, but even more challenging is to determine its properties experimentally.

This latter difficulty is due to the fact that one needs to measure the mass and the radius of at least one neutron star to be able to understand which particles exist in the inner core. Indeed the mass and radius determine the strength of the gravitational force but also how packed together the particles are and therefore how strongly they interact inside the neutron star. The mass can be rather easily determined, and indeed we know some tens of neutron star masses. However, measuring the radius of a neutron star with a reasonable error (say, 1 kilometer) is a formidable challenge, given that these objects are only about 20 km across but still they have located thousands of light-years away from us. In short: all radii measurements that we have today are largely unreliable.

A few weeks ago a large international team of nuclear physicists and astrophysicists published a state-of-the-art review about the strong interaction in the post-Higgs boson era. In particular, a section of this work is dedicated to the constraints that new particle accelerator experiments (in particular the so-called heavy-ion collision experiments) have placed and how they will affect our future understanding of ultra-dense matter. Such particle accelerators are certainly less famous than the superstar Large Hadron Collider at CERN, but they are optimized to study heavy nuclei and dense matter. These modern particle accelerators are able to create matter at densities similar to those found at the center of neutron stars (about 2-7 times the density of atomic nuclei). However, the matter created in these experiments differs from that present in neutron star cores in several important ways. For example, the heavy-ion collision matter has a high temperature, whereas the neutron star’s inner core can be considered cold, which substantially changes the properties of the matter studied.

Despite these limitations, heavy-ion experiments like the Japanese J-PARC seem to suggest that the interior of neutron stars is most likely not constituted by just neutrons (plus a small fraction of protons), differently from what the name of these objects would instead suggest. Also, recent calculations supported by further experiments seem to indicate an important role played by hyperons, which are particles similar to neutrons and protons but with one strange quark among their constituents (neutrons and protons are made only by up and down quarks). This is not yet an established fact, since the experiments that support this idea need to be made at energies higher than what is possible to achieve today, but the idea that hyperons do indeed play a role in neutron stars is growing in popularity.

Another experiment, recently performed at the JLab in Virginia (US), used a beam of electrons hitting very large nuclei which are rich in neutrons. Since electrons do not feel the strong force, it is possible to study neutron-rich matter without being affected by the uncertainties of the strong force. In this way, it has been possible to directly measure the physical size of neutron-rich nuclei, a quantity that is directly related to the pressure found inside neutron stars. This latter quantity is in turn strongly connected to the density of matter and thus to the particle composition of neutron stars. The current status of the radius measurement at the JLab is still plagued by too large error bars to say anything conclusive about neutron stars. However, planned measurements to reduce the current error by a factor of 3 could provide unprecedented constraints on the cold ultra-dense matter.

Finally, it has been long known that at high densities a phase of pure quarks can emerge and substitute the nuclear matter discussed above. Here the major challenge is theoretical, as new numerical techniques are required to perform calculations and determine the properties of this new state of matter known as quark matter. Quarks have the weird property of being confined in bigger particles, like protons and neutrons. If you pull quarks apart they oppose more and more resistance (confinement) whereas if you push them closer and closer they start to move freely. This very counter-intuitive property is called asymptotic freedom. Quark matter in neutron star cores (if it exists) might be composed of quarks so packed together to be almost deconfined. However, existing calculations on quark matter are valid only in a regime where densities are much larger than those found in neutron star cores (and therefore they are more “asymptotically free” than in neutron stars). New numerical techniques however are being developed and it seems now possible to start resolving some of the problems that affect our understanding of quark matter at lower densities. The future of neutron star physics seems extremely exciting not only from an astrophysical point of view!